"Modern Slaves are no longer shackled in Chains, they are now SHACKLED with DEBT."

Join the MEMBERS OF THE PRIVATE BANKER’S BANK NATIONAL ASSOCIATION and become a Private Banker and CREDITOR under Federal and Common Law to fight the Big Bad FEDERAL RESERVE CORPORATION BANKS.

Private Bankers National Banking Association was established 6 October, 2012, as a Private National Banking Association under Federal Law for members of ordinary people like you to write by signing your signature on and to issue preprocessed for a fee promissory notes processed by an Associate’s Legal Financial Security Documents Processing Company as per Congressional Positive Statutes At Large Law, Title 62 – Banks and Banking; the Attorney written United States Code of Law at Title 12 U.S.C. §24 seventh and Title 18 U.S.C. §8 so the average man or woman can pay off Bank Presumed Debts without using Federal Reserve Note Commercial Paper Fiat worthless Dollars by the I.R.S. publication on money as a private business corporation with a British Crown Dunn & Bradstreet Business Company Number that counterfeits money as per 12 U.S.C. § 411; the Federal Reserve Act §16; U.C.C. Law; and the Colonial Confederation of Individual 50 state Nations Organic Republic Constitution For the United States of America, 1787.

The Federal Reserve Bank District of Columbia MUNICIPALITY Notes are not meant for you, the public, to spend as money. 12 U.S.C. § 411- ISSUANCE TO RESERVE BANKS; NATURE OF OBLIGATION; REDEMPTION states:

Lawful money is gold or silver coins with a troy ounce .999 pure. Although the United States Department of the Treasury in today’s economy only Stamps coins of much less pure gold or silver, these U.S. coins are the only legal coin and currency of the United States of America and lawful money.. The Federal Reserve fiat paper money known as dollars are counterfeits printed by a private corporation that does not have the Authority of a true Congress as the Congress of the UNITED STATES is just another CORPORATION..

Did you know that the Federal Reserve, the Treasury, the United States Government and all U.S. Departments have a British Crown Dunn & Bradstreet Business Company Number and are all just CORPORATIONS with a registered number in each STATE OF MOTHER UNITED STATES CORPORATION?? Well, they do have this foreign number and are all Corporations of the elite and a lot of them are listed in the PBNBA e-booklet below.

This means Your UNITED STATES GOVERNMENT is not what you have believed! Every STATE and City in the United States is a STATE OF REGISTERED Sub-Corporation of the UNITED STATES CORPORATION MUNICIPALITY and has one of these foreign business company registered numbers from the Crown of England. What do you expect from a Territory Corporation of England?

This means you are committing a crime and are a Legal Fiction, Capital Corporation for spending Private Company Federal Reserve Notes in the place of lawful money. This is why you pay income taxes, property taxes, registration fees, and all types of other fees to the banks and Business Corporation BAR Courts with Black Robed Attorney Judge Administrators impersonating Courts of Justice in each and every STATE Sub-Corporation because you use their company scripts known as Commercial paper Dollars.

Every BAR business corporation company court in every STATE also has a British Crown Dunn & Bradstreet Business Company number also which means they are not COURTS OF JUSTICE as you believe them to be not even your State Supreme Court!

72 of the Banks’ Attorneys and Judges wrote this Uniform Commercial Code, U.C.C., of Commercial Contract Laws and statutes under the color of law that looks like a true law but is not true Congressional convened at large law since 1861 when the true Congress became a CORPORATION..
We nor I did not write the CORPORATE MUNICIPALITY WASHINGTON, DISCTRIC OF COLUMBIA Commercial Code of Statutes to deceive you, the American people!!

Look it up for yourself and see the banks’ fraud upon the American People. Also look up the ACT of 1871 where the Continential UNITED STATES land area and Government became officially, a MUNICIPALITY CORPORATION..

You, as a Private Banker you become a LEGAL CREDITOR who has the authority to legally write, by signing your name, and issue to the banks, our Associate Legal Financial Instruments Processing Company’s pre-processed for a fee note security to pay off debts on the same par as the Federal Reserve Note Dollars by Federal U.C.C. Law in Commerce and Common Law as an active Lifetime member of the Private Bankers National Banking Association, PBNBA.

Write a Promissory Note by signing your signature and Issue your own preprocessed for a fee promissory note to pay off debts with the processing of our associate’s website by joining today.

Only Lifetime memberships are available.

Our e-booklet explains the laws and how an individual man or woman, a Private Banker LEGAL CREDITOR, can actually pay off debts with the issuance of a PBNBA associate processed promissory note Registered Security for a one time small fee compared to the full amount of your debt instead of using the UNITED STATES Private Corporation Company Fiat Federal Reserve Note Dollar script paper counterfeited, dummy money that keeps you tagged as a UNITED STATES CITIZEN DEBT SLAVE..

The Private Bankers National Banking Association preprocessed for a fee, Note Securities, have Legally paid off debts against the obligations of the United States due you whose private property is at risk to collateralize the government’s debt and currency, by legal definitions and to pay off the UNITED STATES Company Corporation’s National Debt..

Private Bankers National Banking Association promissory notes are required by law and the U.C.C. to be accepted as “Legal Tender” of payment of all debts public and private and are defined in law as “Obligations of the United States”, “Legal Tender”, and “United States Currency” on the same par and category with Federal Reserve Notes, Notes; Cash, Checks, Bank Checks, Wire Transfers, Bank Transfers, Electronic Funds Transfer, Certified Checks, Treasurer’s Check, Money Orders, Bank Deposits, U.S. Currency, and other currency.

Order your PBNBA e-booklet today and become a Lifetime Private Banker to pay off all your debts now.

The Private Bankers National Banking Association Link, User Name, and Password will be on your payment receipt for instant download, so be sure to read your receipt.

You must order the PBNBA e-booklet in order to send us the required Items Needed and Agreement before we can process your lifetime membership.

Join today for a LIFETIME MEMBERSHIP to issue multiple promissory notes for a Special Introductory offer for a limited time only.

Order your LIFETIME MEMBERSHIP to issue multiple promissory notes in the Private Bankers National Banking Association now so you will be able for us to get your promissory note security legally processed and your debt paid in full with full settlement of your debt under the law.

Order by completing NOW. Remember, ALL the banks have accepted our promissory notes and they have signed in BLUE INK ‘received and accepted’ right on the note itself and your color copy as evidence of your debt payoff.

As of 1 JANUARY, 2017, your lifetime membership gives you a $500.00 discount on only the First LPN you write that we process and the price is now $1500.00. SO… When you purchase the Legal Processing for both the PBNBA Membership and the LPN Security to pay off your debt, you save $1,000.00 built-in DISCOUNT.. Don’t Delay, Become a Private Banker and Creditor today!

And email me a copy of the cashier check AFTER you send by FedEx, so we can start processing. Sorry for the temporary inconvenience.. We process and send the complete LPN Security and PBNBA Membership Package out every Saturday by DHL Courier for those ITEMS NEEDED and Agreement with Payment that we receive by Thursday prior to Saturday..

We are Private Bankers and Legal CREDITORS under Federal Law, Common Law, U.C.C. Commercial Law and World Law and we are NOT Attorneys nor Accountants and we do NOT provide any legal, accounting, or financial advice and we do NOT make loans. The LPN process is NOT a do-it-yourself Process! I am the only Independent Licensed Financial Documents Processor for the IPN and the USA Domestic LPN used as money to pay off debts under the Legal definition of a National Bank. 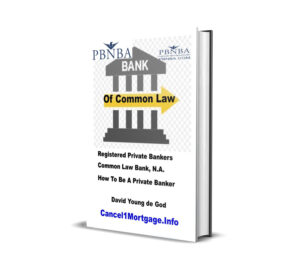